Victory over York lifts NK into Region I tournament


After splitting the first two games with York’s Falcons, New Kent’s Lady Trojans swept the final two to advance to the Bay Rivers District volleyball tournament semifinals and qualify for the Region I tourney. The Oct. 30 victory upped the third-seeded Lady Trojans’ record to 15-6 while York’s season ended at 11-10. New Kent cruised to an easy 25-12 win in game one, but lost concentration in game two as York rebounded with a 26-24 decision. The hosts then struggled to turn back the Falcons 25-19 in game three before taking command on the way to clinching the match 25-18…
Read Full Story


For most of the first half, Charles City’s Panthers stayed even with Surry’s invading Cougars as the hosts searched for that elusive first football win of the season. But the Cougars scored a pair of late second quarter touchdowns to break a 6-6 deadlock and head for a 26-6 Tri-Rivers District decision last Friday. The loss dropped Charles City to 0-4 in the district and 0-9 overall. The Panthers get one last shot to break into the win column as they visit Chincoteague this Friday for their final game of the season. By halftime Friday night, the contest was almost…
Read Full Story


Unable to deliver a knockout blow in a title match of Bay Rivers volleyball heavyweights, New Kent’s Lady Trojans settled for runner-up to Jamestown’s unbeaten Eagles. The Lady Trojans stunned the top-ranked Eagles on the number one seed’s home turf in last Saturday’s district tournament final, but couldn’t seal the deal. Jamestown escaped with a 19-17 overtime win in the deciding fifth set after the teams had split the first four. Afterward, Lady Trojan players exhibited obvious disappointment with some reduced to tears. “Why these girls are so upset is they know they should have won,” New Kent coach Cyndi…
Read Full Story


Simply put, New Kent’s Trojans had no answer, either offensively or defensively, for Poquoson’s Islanders. The host Trojans could neither sustain drives nor stop the visitors as Poquoson posted a 35-0 Bay Rivers District football win, ruining New Kent’s Oct. 24 homecoming celebration. The Islanders built a 14-0 halftime lead, limiting New Kent to only a pair of first downs, and pulled away after the break. The loss dropped the Trojans to 1-6 in the district and 2-6 overall. “We didn’t make any plays,” complained Trojan head coach Dan Rounds afterward. “We’ve got to find some kind of offense. We…
Read Full Story


For New Kent’s injury-riddled Trojans, last Friday night’s storyline matched that of previous weeks on the football field. The hosts found it difficult to stop Grafton’s Clippers as well as mount an offense of their own. Grafton rolled to 24-6 halftime lead and built a 38-6 advantage after the break before surrendering a pair of late touchdowns. And for the fifth consecutive week, New Kent fell to a Bay Rivers District foe, this time by a 38-20 count. New Kent’s last victory came on Sept. 20 at Warhill. Friday’s outcome dropped the Trojans to 1-7 in the district and 2-7…
Read Full Story


New Kent Lady Trojan players and coaches rated their final regular season encounter with Grafton’s Clippers — a five-set, three overtime win — as one of the best victories in New Kent volleyball history. Now their latest disposal of the Clippers — another five-set triumph in last Thursday’s Bay Rivers District tournament semifinals — can be counted among the greatest comebacks of all time. Down by two sets and trailing 9-3 in the third set of the best-of-five affair, the host Lady Trojans staged a furious comeback to salvage the third set and went on to capture the next two….
Read Full Story


Two Richmond men, both on trial for separate incidents that involved police chases, are serving time behind bars after pleading guilty to charges in Charles City Circuit Court. Richard Mandrell Byrd, 34, of 509 Pulaski Ave., and Maurice Hudson, 35, of 1615 Thalia Crescent Road, entered guilty pleas on a pair of charges each as part of separate plea deals reached on Oct. 24. Byrd was indicted in September on one count each of eluding police and driving after being declared a habitual offender. Both are felonies. Last June 29, Byrd led a Charles City deputy on a four-mile chase…
Read Full Story


In the aftermath of a recent legal challenge to New Kent’s 2008 real estate reassessment, county officials are out to change state law dealing with property tax levies and the reliability of assessments. The county’s Board of Supervisors is considering the proposals for inclusion in their annual legislative agenda package that is forwarded to local representatives in the state’s General Assembly. A final package is to be ready before legislators’ short session begins in January. County Attorney Jeff Summers unveiled the proposed package during supervisors’ Oct. 28 work session. The proposals are among close to two dozen issues that county…
Read Full Story


A proposal to permanently move New Kent’s branch of Heritage Public Library into the main building at the county’s old and now empty middle school apparently is winning the blessing of county Board of Supervisors members, especially since renovations would be about one-fourth the cost of a new building. Despite supervisors’ enthusiasm for the old school proposal, unveiled during the board’s Oct. 28 work session, library officials who sat in on the meeting didn’t exactly jump on the bandwagon. A plan devised by the county’s General Services Department calls for renovating 16,000 square feet of the school’s main building over…
Read Full Story 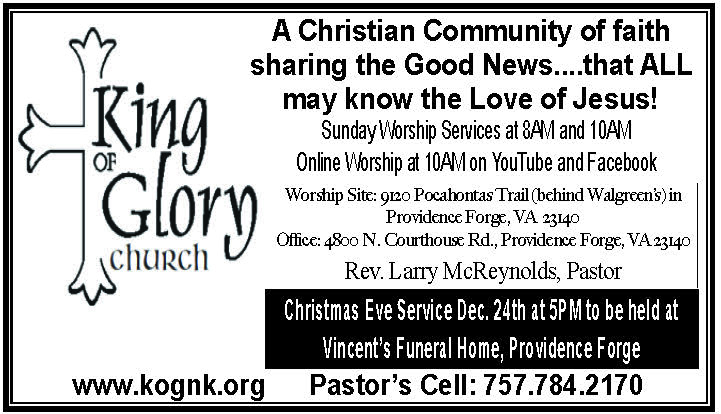